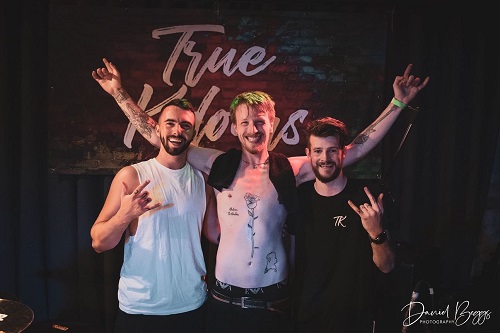 Their debut single, ‘Stevie’, released February 2019 has accumulated over 1.4K streams on Spotify. ‘Stevie’ has proven to be a popular, catchy number with their fans, and together with their second single ‘Soul’ have had plays on BBC Radio Ulster.

Formed by school friends Glen Dubbelaar (vocals, guitar,) and Jack Woods (drums), they incorporated the talents of Eamon McElroy (bass) to complete their sound. Towards the end of their first year, they released their punchy debut album, ‘Whatever the Weather’. Individual tracks echo classic pop song writing combined with a powerful drum underlay to create a youthful energetic album which appeals to many.

True Kolours have headlined several shows in Belfast, including The Empire. Their live session, recorded at Start Together Studios, (available on Youtube,) demonstrates the infectious, fun-loving energy that the band exude. Their growing fan base is testament to their increasing popularity and new releases continue to surprise and intrigue industry professionals.

‘A really exciting prospect, good to get on board early.’ – David O’Reilly – BBC

‘These guys are up there with the best I’ve heard.’ Stuart Robinson – Cool FM

Not Your Usual Day At Home (online livestream)