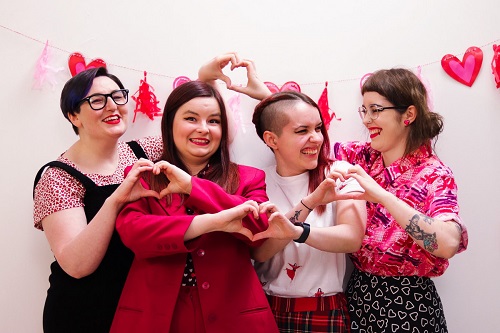 The band does not have a singular frontperson, opting instead to switch roles and instruments, to ensure each member in the group has a voice. While often lyrically tongue in cheek, no subject is off limits. Most importantly, Problem Patterns aim to create a space of inclusivity and hope, for both themselves and the listener.

Formed in November 2018, their first single, “Allegedly”, was recorded and released within a month.

In 2019, Problem Patterns released their debut EP, ‘Good For You, Aren’t You Great?’ Later in the year, the band were nominated for the Oh Yeah Contender Award (Best New Act) at the Northern Ireland Music Prize.

“Problem Patterns could take their show to 'cold' crowds pretty much anywhere and make a damn good fist of leaving jaws on the floor."- David Roy, Irish News

“It’s just like they’d been released into the world to cause havoc, and they did it brilliantly.”- BBC, Across the Line